That ongoing interior design dilemma – how to disguise the television

It used to be so simple. Glowing coals and flickering flames in every hearth created an effortless focal point for sitting rooms across the country. Then just as central heating came along, releasing the family from a huddle by the fire, (sitting around a radiator was never going to catch on!) the television set arrived.

50 years on, the television remains the object that most often determines the flow of a room and the direction of its furniture. No longer the box in the corner, today’s screens reach mini-cinema proportions. Some of us are happy with this. But if you’re not, how do you stop your TV from dominating the room?

1) Wall-mount and disguise it

If you’ve switched to online services and sent your DVDs to charity, the storage unit that housed your collection and player has become a cumbersome white elephant. We’re all wall-mounting now!

Try placing your screen on the wall at a comfortable height and surrounding it with eye-catching artwork to diminish its impact. The strongest design statement in the room below is the variety of framed pieces and how cleverly they echo and balance the range of window sizes. A branching floor lamp draws the eye to the corner of the room. You have to play Hunt the TV to find it. 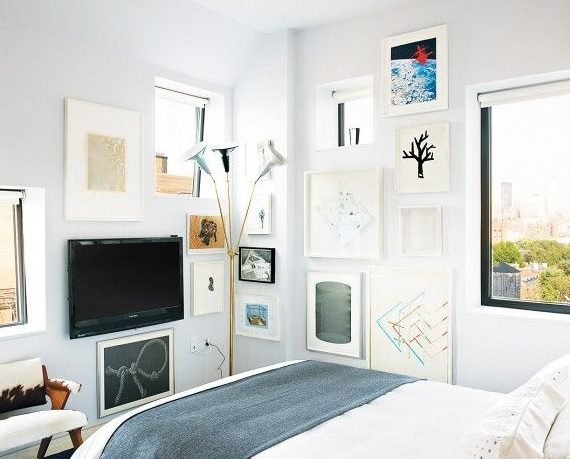 2. Let it melt into the background

Another visual trick is to paint the wall behind the set a dark colour. See how the screen blends in when switched off? Its smoky glass becomes a subtle mirror for the wall opposite. Dark, saturated greys and blues are increasingly popular at the moment. Experiment with Railings, Hague Blue or Downpipe by Farrow and Ball. 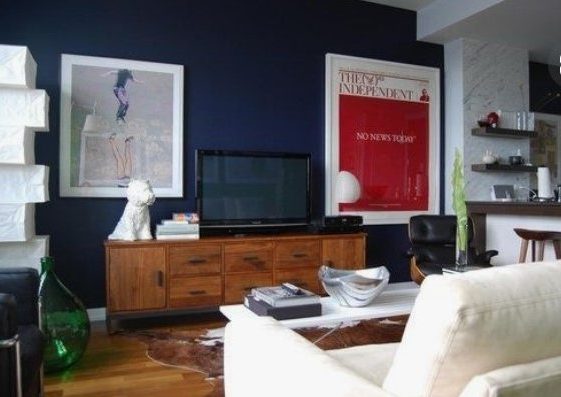 If budgets allow, we can now pretend the TV is something else altogether. Current technology is pretty convincing. Samsung’s The Frame television looks like a mounted photograph when switched off. You can rotate 100 different artworks or family photos on the screen and customise the frame to fit your decor scheme. 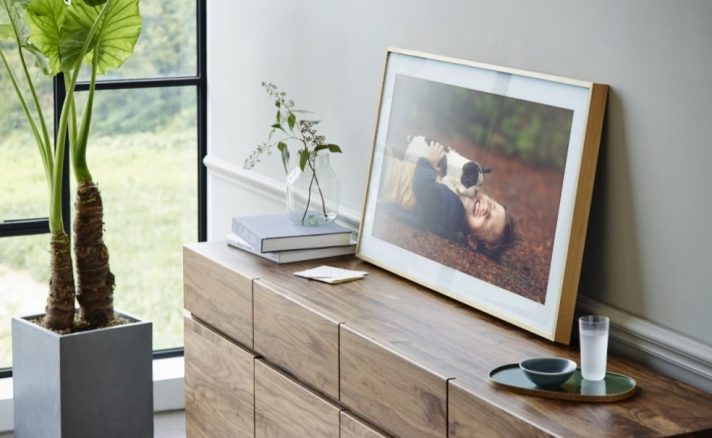 The Frame Television by Samsung

Other options present the television set itself as a piece of art. Samsung’s Serif TV is an attractive letter if positioned side on. And its textile back cover looks like an artist’s blank canvas if placed on an easel or tripod away from a wall towards the middle of the room. 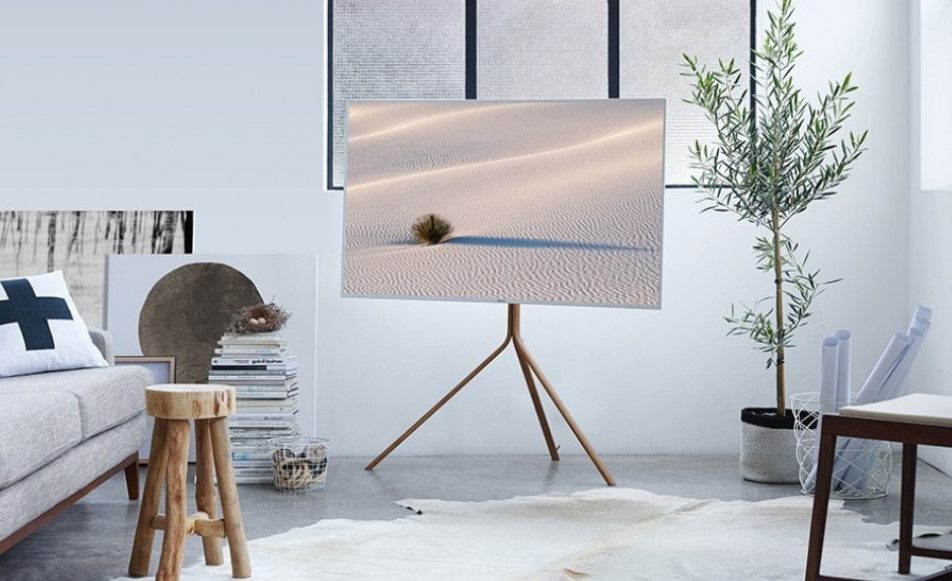 The “Serif” Television by Samsung

5. Broaden the base with a wide sideboard

If wall-hanging or masquerading as art aren’t for you, pay attention to scale. Increased screen sizes mean that new models overhang the classic TV stand and look unbalanced. Try using a long, low sideboard as a base that dwarfs the screen. Mid 20th century modern designs are dramatic vintage choices. For contemporary rooms, many manufacturers are responding to the changing market by creating wider pieces that allow the TV to sit on top at a comfortable height. Make use of the surface space either side of the screen to display well-chosen objects. Add art or mirrors behind to further deflect the eye. 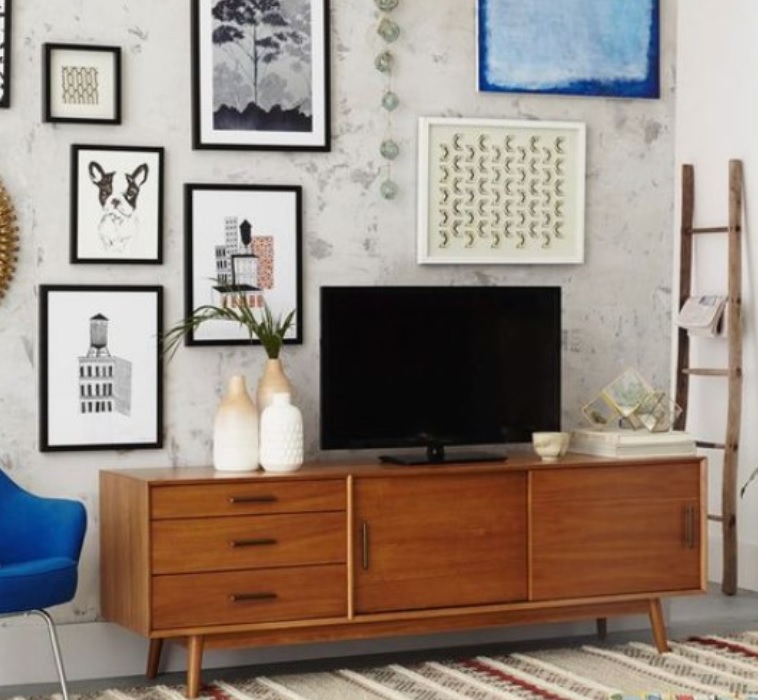 6. Offset it in a full wall system.

Built-in units work well around screens of all sizes. Traditional carpentry either side of the fireplace allows you to set the screen in an alcove and keep the hearth as focal point. Modern modular designs mean you can pick and mix shelving and cupboards that balance the space around the screen. At the higher end of the market, Poliform and Go Modern have some elegant options. For a more cost effective solution, good old Ikea is king! Try their BESTA system which allows you to adjust the unit heights to accommodate a large TV. And if you’re updating the TV, consider a white set to blend in with a pale unit. 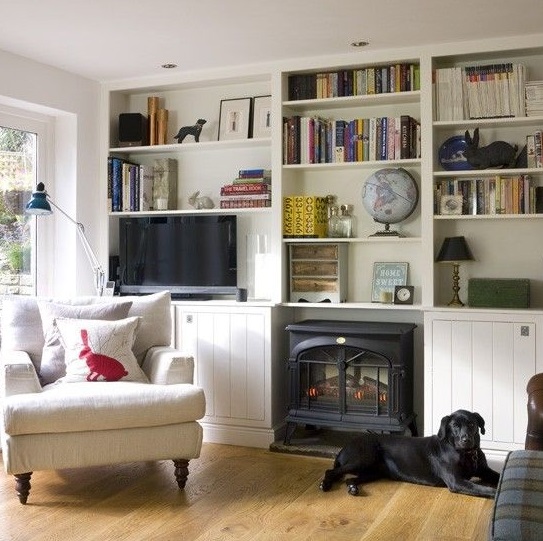 7) If all else fails – hide it away completely

We love this option! If you want to rid your room of it completely, consider turning to bespoke joinery such a decorative wall cabinet with the screen inside. Many of the ‘wallpaper’ TVs are less than 30mm thick now making this easy. Take advantage of period detail and work with it so that the hiding device is seamlessly incorporated into your design scheme. Traditional wood panelling can be adapted with sliding doors to conceal the set.

In contemporary properties, add a James Bond talking point in the form of a TV lift. Companies such as Maiormover offer designs that  fold back your TV seamlessly into the ceiling. No cabinet is needed, freeing up room for other furniture. And the kids will love it so much they’ll beg you to put the TV away. 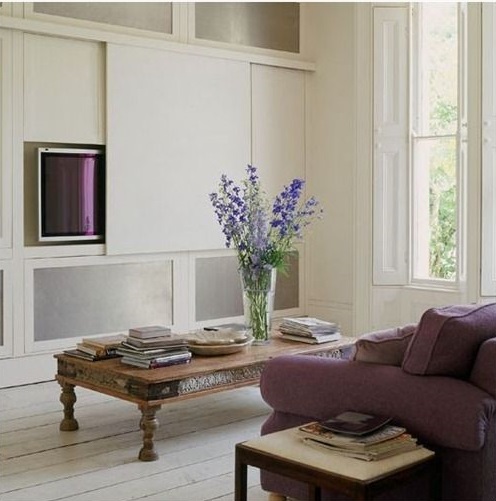 With so many options, there’s no reason why we need ever let the television dominate our living space again. But if you still can’t ignore it, the ultimate new trend is to get rid entirely and watch online. 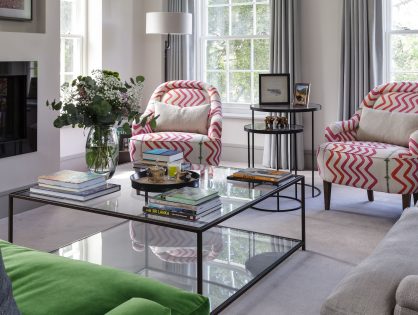 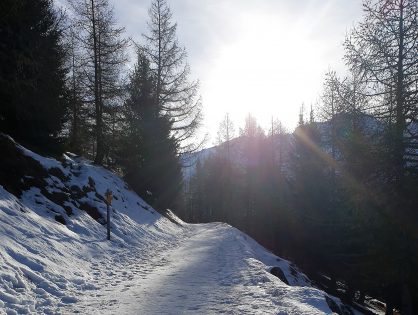 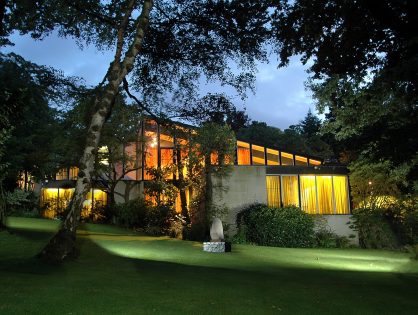 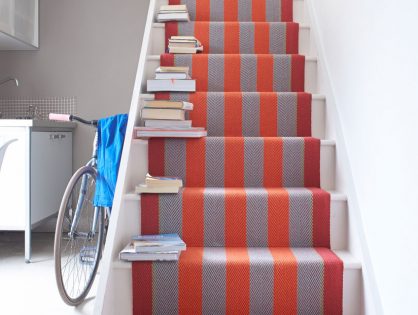 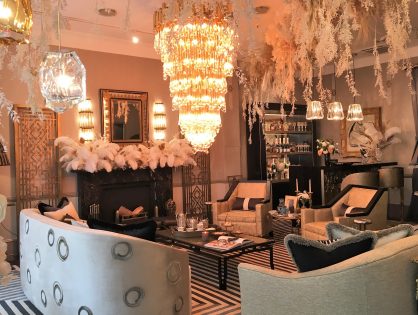